Greetings dear readers and apologies for the delay in blog updates but the muse has been missing in action and while I have made one start it sounded like crap when I re-read it so let’s have another go.  A quick review of Dampier. The yacht club is a haven for cruising boats. It has a washing machine, showers fuel and water access and the bar upstairs serves excellent meals in an open air setting looking out over the often startling Pilbara sunsets. We had the use of a car and so made the most of it by catching an excellent art exhibition at the old town of Cossack and a drive around my old haunts of Point Samson.  The Pilbara was home for me off and on when I finished school and there are a lot of memories scattered around these barren hills. We did another big provision including fuel and decided to head out to explore the archipelago and the Montebellos while we waited for a new main to arrive......they said it should be at the yacht club in a week...oh yeah!!
There’s no better feeling than heading out of port fully provisioned with water and fuel tanks topped up and an unexplored archipelago waiting around the corner. Dampier Archipelago comprises 42 islands and islets lying within a 25nm radius of Dampier and they were formed 6-8 thousand years ago when rising sea levels flooded coastal valleys. The anchorage out front of the yacht club is hemmed in by giant ore loading facilities and everywhere you look you see signs of gas processing and iron ore export. Huge tugs buzz about waiting for the ships to come in, work boats and service boats monopolise the anchorage and everyone is dressed in the blue and gold uniform of the North West. About two hours away is Whalers Bay and this is our first anchorage. It seems we can’t quite escape the long reach of the resource boom and smack bang in the middle of the bay is a gigantic oil rig called the Ocean Legend. I think it’s only parked here waiting for its next call up. A little later another ship anchors off the other side of the bay and again we are reminded that this part of WA has really gone.......sold to the call of the export dollar. Still, we dinghied ashore and swam in the crystal clear waters of the Whalers Bay and enjoyed our 5 o’clock beers watching the sun sink behind the blood red hills.
The next day we motored around to the other side of Malus Island and dropped the pick in a perfect U shaped bay off Courtney Head. There is coral here and plenty of it but most has suffered from a localised bleaching event in 2006 that affected this archipelago significantly. Still, the days were a balmy 28, the water sparkling clear and we were finally slipping into a cruising state of mind. Time did not matter. Our days were interspersed with reading, diving, staring at nothing in particular and doing the odd job of maintenance. Ahhhhh, all those months of preparation, planning and paying were starting to earn dividends. As a cruising boat, The Doctor was working beautifully and all the research and thought that had gone into her refit was paying off. We rang the sail maker and there was another delay.....staffing problems and it wouldn’t be ready for another week.......oh yeah!!!????

Not a problem we said, in fact it’s a bonus as it gives us an excuse to pop over to the Montebellos and wait out there. The Montes are a chain of limestone islands that stretch over 10nm from north to south with cliffs up to 12m high interspersed with white sandy beaches. Sounds idyllic doesn’t it and yes dear readers, The Montebello islands are paradise. The sail over may have been less than idyllic but as they say, no pain no gain. We left at 12.30 am so we could arrive in day light and negotiate what are some tricky channels and tides. Getting up at midnight to sail through the night with no moon and a lumpy sea complete with head wind is not the kind of thing most people think of doing as they turn off the remote and head for beddie byes. It was a long night but the following 9 days were bliss.

The islands are mostly low lying and they form a kind of circle shape with a big enclosed harbour in the middle.  There are countless bays that end in sandy beaches and each bay is teaming with marine life of all descriptions. We spent 4 days at Chianti Bay (a lot of the bays are named after wines...Burgundy, Champagne, Vermouth, Hock......and yes a few bottles of red were consumed along the way) and this spot would rate in the top 5 anchorages we have been lucky enough to enjoy. We have an ongoing campaign with a good friend Ron Jensen and it involves either of us ringing each other when we have a paradise anchorage and rubbing it in so to speak........we have the run on Mr Jensen by a country mile. If we had phone coverage I would not have rung to gloat on this spot only because it was so perfect it just wouldn’t be fair. The bay is deep and sandy and it finishes in a cute strip of golden sand that shoals at a perfect gradient. To our left was a collection of bombies that had a variety of fish life and coral displays that were impressive. 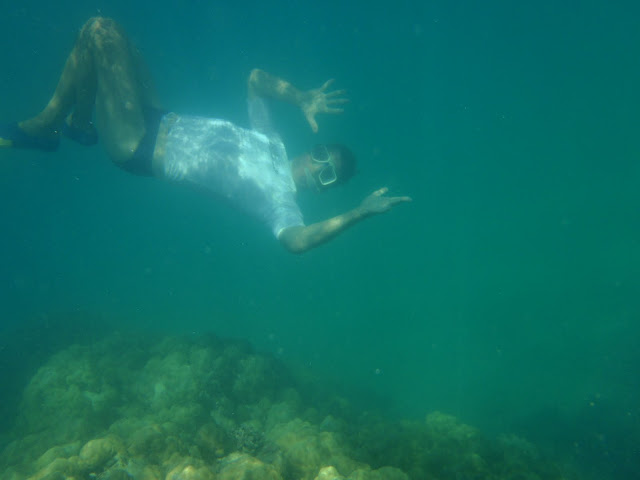 A 6 foot long Queensland groper adopted us while we were there and he was quite happy to sit next to the keel and meander around while we swam over and around marvelling at his enormous size.
When you go ashore you are quickly reminded that not everyone thought of this archipelago as a paradise found. The British decided to use the islands for 3 nuclear weapon tests in the 1950s, a 25 kilotonne ocean surface blast aboard HMS Plym, a 15 kilotonne blast on top of a 31 m tower on Trimouille island and finally a whopping 98 kilotonne blast on Alpha island. The sign says not to stay on shore longer than 1 hour at a time, not to disturb dust and not to take any object from the island. 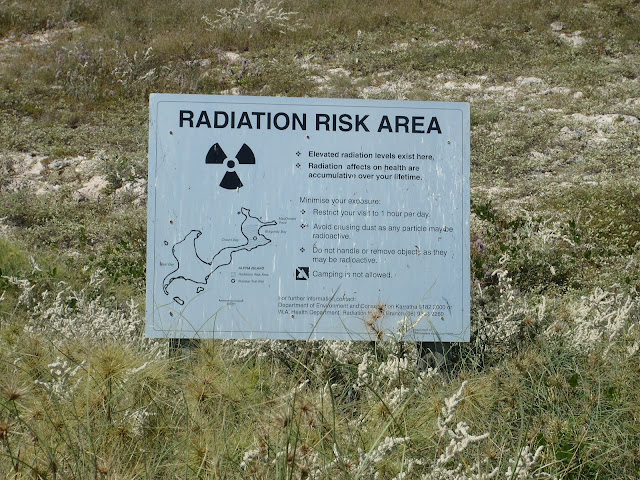 Sitting on the beach waiting for Diana to come back from a walk I started picking off oysters from the rocky edges of the bay..........forgetting that dire warning I had just read......they did taste a little metallic!!! Some school kids went to the islands on an excursion (any teacher reading this just imagine the risk assessment you would need to fill out to cover this trip........I think we won’t be going) with Geiger counters and their readings were no greater than from the watches they were all wearing, plus I have had more than my share of Cat scans over the years so a little bit of 50 year old radiation is a walk in the park. Imagine the brave individual submitting an EPA application to nuke a set of islands off the coast in today’s climate.........You want to do WHAT??????????? Still, we were so subservient to the motherland back in those days and I suppose some useless collection of limestone islands 60 nm miles off Onslow were not going to be missed. Glad to report they have all bounced back from their nuking and the Montebellos are a delight, a treasure and indeed one of the great experiences of our sailing adventures to date.
We left for Dampier on a rising tide at about 8 o’clock in the morning, gliding over turquoise water, watching whales do their whale thing off shore and bidding a sad farewell to these beautiful islands. A cruising friend we met there spends 4 months at a time in the islands and we were very envious. Still, we had to get back to pick up the main and make our way to Broome. As soon as were in phone range we rang said sail maker and no....not ready but could be a truck next Tuesday for pick up Thursday........oh yeah! Plan is now to push onto Broome and pick it there......or maybe we’ll just leave it till Darwin.....till next time, Cheers Rob
Posted by Diana and Rob at Sunday, August 14, 2011