It sounds very grand, heading for Thailand, a new country, but the border is only a few miles north of Langkawi, Malaysia. We cleared out of Kuah, Langkawi’s major city, or so we thought, but Rob will fill you in on that later, and headed around the picturesque south eastern side of the island and threaded our way through channels and between steep sided islands. One of the “must see” anchorages of Langkawi is called “The Hole in the Wall”. We went through a similarly named gap on the north eastern tip of Australia many years ago on our old boat, Norlee. That Hole in the Wall was almost impossible to see until you were nearly on top of it and then it looked like an impossibly small gap in a wall of rock. Langkawi’s Hole in the Wall was a lot easier and we didn’t have strong tides to deal with. Actually all we had to do was follow the constant stream of tourist long tail boats to find the gap. Once we squeezed in through the rocky gap, it opened up into a quite wide anchorage, with mangroves on one side and rock faces on the other. Look up and the cliffs tower over the anchorage. The anchorage provides perfect protection and would be a great bolt hole in any situation, storm or tsunami.


Apart from a few anchored boats, and the tourist boats of course, there was no sign of habitation, or so it seemed, until we got into the dinghy to explore around the corner of the inlet. Go to the river crossroad, turn right and there is a string of floating restaurants and fish farms together with a line of moored yachts. It came as quite a surprise and even more surprising (pleasantly), was the meal of fish and chips that we shared. We only had enough money for one as we weren’t rally expecting a meal out. It was appropriately a Friday, our traditional day for fish and chips and it was a pretty good feed. We made enquiries about leaving The Doctor on a mooring and it can be done very cheaply, even if you include regular cleaning and inspections. Many people leave their boats there for months on end while they fly home to various parts of the world. 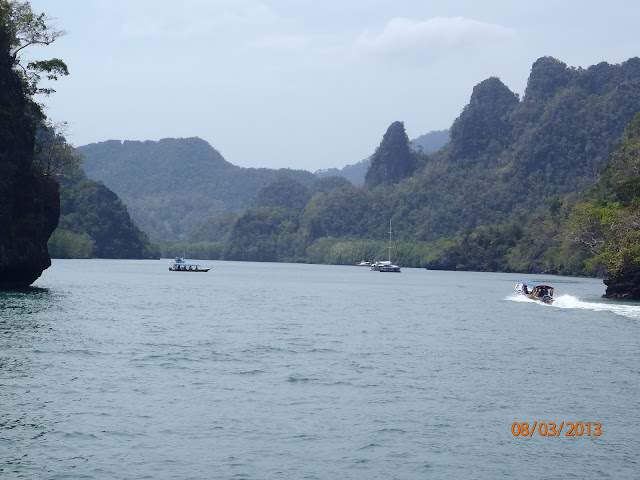 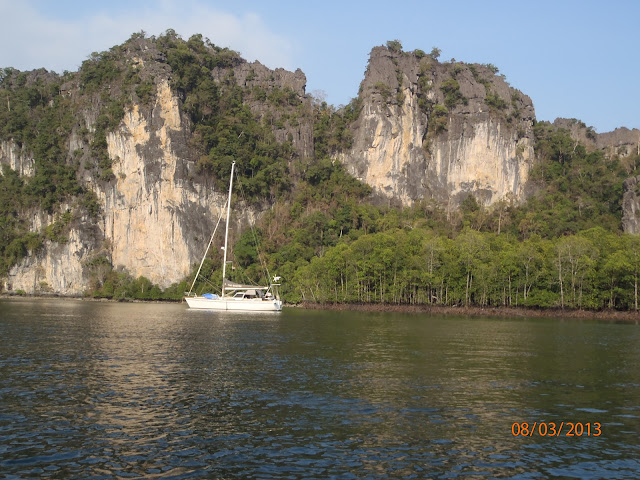 From The Hole in the Wall we sailed (motored) the onerous 5.8 miles to the island of Taratao, a big island within Thai territory. The east coast of the island has a beautiful daisy chain of small islands that you can snuggle up behind. Deep water made it a little difficult, but not impossible. The islands have steep sided rock walls with a melting ice cream cone of thick jungle spilling towards the water. The rock faces are melted and folded with interesting rock formations and caves, a great place to explore on surf ski. We found caves full of bats hanging in their hundreds, a family of sea otters and a swimming monitor lizard. Not a bad haul on the nature watch scale of events.


Four days and four islands later we were ready to do the trek up over the shallow banks towards the PSS shipyard in Satun, southern Thailand. There we will have The Doctor hauled out of the water and tizzied up a bit, but that is another story. Stay tuned.