Taking the boat out with Tina’s help had given me some confidence that I could take the boat out by myself. Langkawi has fairly benign sailing conditions, apart from the odd tropical thunderstorm, and the navigation is pretty straight forward. It isn’t like say Rottnest, or anywhere on the west coast of Australia where anchorages are often shallow and reef strewn. To be extra sure though, I did wait for my friends Ann and Steve on Recluse to act as my “buddy boat”.


We were out of the marina without a hitch and we rendezvoused with Recluse off Telaga Harbour, just a few miles away. As we motored (no wind) along the west coast of Langkawi it didn’t feel any different being on the boat alone. It just felt like Rob was down below reading or having a nap. I was surprised though at how busy the solo sailor is! The jobs aren’t shared so navigating, checking the engine and instruments, dropping the anchor, watching to see if it has taken, putting the anchor snubber on, recording the log, putting up the shades, launching the dinghy, fuelling up the outboard. It goes on and on. Motley is absolutely no help at all. If only she could take the wheel occasionally. She does love to be on anchor though and seems to rediscover her kitten ways, leaping from boom to bimini and back again. The first few days I was exhausted and collapsed in a heap at the end of each day. It was probably partly due to nervous energy too.

The first anchorage was Teluk Datai, a beautiful horse shoe shaped bay with a a long white sandy beach flanked on each end by Langkawi’s most exclusive resorts The Datai and The Andaman. Steve and I attempted yoga on their finely tended beach, but the sand was too wet after the evening’s rain. I need to talk to management about that.


One of the advantages of being on anchor is that you can get in the water and clean the water line from the muck and slime that tends to accumulate in marinas. Barnacles also affix themselves to the hull and propeller. I hate diving under the boat to clean the undersides and propeller. I get anxious about running out of air and getting stuck under there. I was determined to give it a go though, and managed with each dive to get perhaps one barnacle off, before launching myself back up to the surface, gasping for air. It was while I was hanging on to the side of the boat recovering between dives, when I felt a thump on my back. I turned to see a huge, ugly brown jelly fish drifting down with the tide. I panicked of course and tried to push it away with the paint scraper that I was using for the barnacles, but my arm disappeared up to my elbow in the glutinous mass. Ugh! I sprang back on the boat and radioed up Ann. “I’ve been stung by a jelly fish!” It had managed to sting me on the back right in the spot between my rashy and bikini bottom.  I actually did know that these jellyfish aren’t lethal, but it had given me such a scare. I decided then and there that the prop can keep its barnacles for all I care! 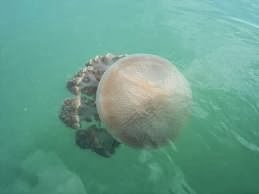 Kindly Greg and Ali on Rex radioed up with some advice on how to treat the sting. Ali had been stung the day before and after some internet research they had treated the sting with a vinegar soaked rag and scraped the stings out by coating the area with shaving cream and then used the flat of a knife to scrape out the barbs. These ugly monsters can grow to three metres across!


More pleasantly, I launched my surf ski early one morning and paddled around a small nearby island in the bay. The island is almost joined at low tide by a narrow coral isthmus. As I floated over the coral admiring the tropical fish, I stopped in my tracks as a family of a dozen monkeys lead by a large male carefully waded across in front of me to the small island. Some found the water too deep and swam, but mothers with babies clinging to their stomachs carefully stood on their hind legs and picked the shallow parts to spare their babes a dunking. They were completely unconcerned about my presence only 15 metres away. I was wary of the very large patriarch and made sure I knew where he was. I didn’t want to get on his bad side!


A pleasant few days passed and we only moved on as some heavy rain and associated winds were predicted. It was very comforting having Recluse along just in case something came up that I couldn’t deal with. But so far so good!