LIFE IN A JUNGLE HOUSE

With The Doctor safely moored at Yacht Haven Marina at the top end of Phuket, and the wet season ahead of us we thought some time on land would be interesting. Nick, the marina manager mentioned that there might be a house available right on their street near the small town of Kok Kloi.
Before we knew it the front door was swinging open to an amazing little house in the jungle  overlooking a babbling stream. It certainly had the wow factor with a huge western style kitchen and comfortable living room all opening up with bi fold doors, to a big shaded veranda.

Terms were negotiated and we packed up the cat and a few clothes and moved in on a Saturday. Before we had even fully unpacked Rob checked the internet connection and our email. Bad news completely took the shine off the day. Rob's mum had taken a fall and broken her hip while on a trip to the Kimberly in far north Western Australia. She was being airlifted by Flying Doctor back to Perth and her condition was uncertain. After many emails to and fro, Rob decided that he needed to get back home to support her when she was discharged from hospital.

Our stay in the house changed from a few months to a few weeks while we waited on news about Rob's mum's recovery. She was discharged in record time and Rob went home to ease the transition home. She is an amazing 89 year old who's determination to get well again meant that she was back on her feet and walking in a very short time.

In the mean time we made the most of our jungle house. It was situated only a short five minute drive to the typical Thai town of Kok Kloi. It has a reasonable Tesco super market and fabulous early morning and Sunday morning markets. The women sellers at the markets were friendly and helpful and very patient with my poor efforts in their language. We had fun going to the markets and getting to know life in a typical Thai town. The joy was the authenticity of a town that was free of tourists and we found we soon got into the rhythm of  the place.
﻿

Rob had a craving for a real western style chicken roast one Sunday. Only a little perturbed by the chickens with their feet doing a Mexican wave, we selected the plumpest looking specimen. Back home in the kitchen, Rob quickly slipped into the well oiled (excuse the pun) routine of rubbing the chicken with butter, peeling the potatoes and readying the roasting pan. Curiously the chicken seemed to lack the cavity where you usually put the stuffing or herb.
"Aaargh! This chicken still has its gizzards" yells Rob as he does a chicken run around the kitchen.
"All you have to do is split it from its bum to its chest and get them out" the veteran chicken plucker (me) says.
"It's got poop in there!!!" cries Rob as his face turns ashen.
"I'm not eating THIS!!!"
We did, but our heart wasn't into the idea any more and what's more, it was so tough and rubbery any remaining enthusiasm was lost by the relentless chewing required to get the poor foul down..

We rented a car as well as the house so had time to explore the local area with its beautiful Wats (Buddhist temples) and national parks. On one drive we were lucky to see some elephants out with their keepers. The country side is stunning with lush jungle and towering mountains. 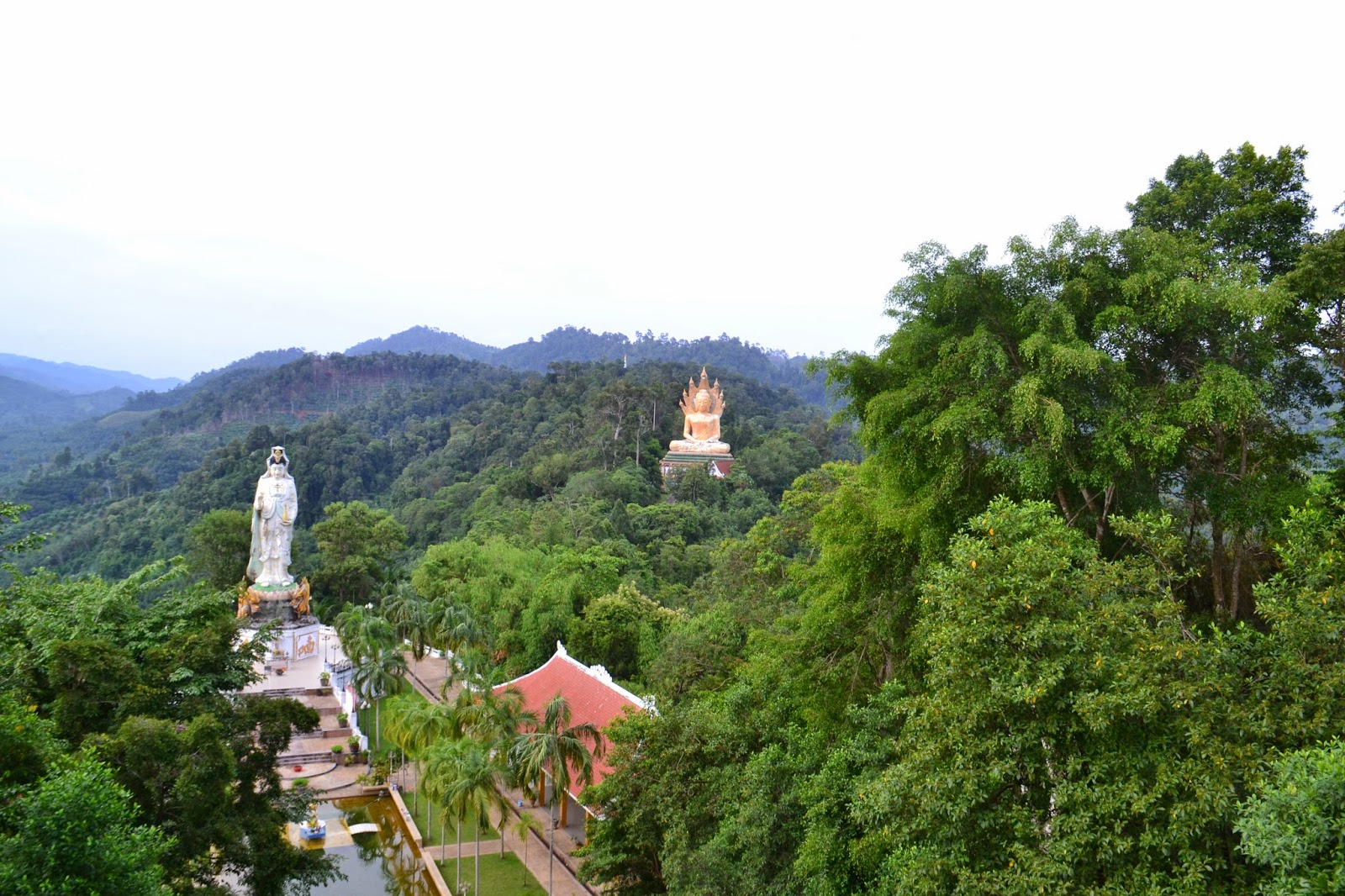 We were so taken with the house and the general area that we started looking at land. This one was nearby and had its own little stream. We had the house designed in our heads, but the owner wasn't ready to sell.

There was a bit of a down side to the picture of the beautiful house near the trickling brook. Being the wet season, it rained and rained and then bucketed down! The beautiful babbling brook became a raging torrent that spilled over its banks and instead of tinkling, roared day and night. It was so loud we had to close the windows at night.


We had a great few weeks in our jungle house and made good friends from neighbors living nearby.
Next wet season we might do something similar, but on the nearby island of Koh Yao Noi. We love the idea of slow travel. I you like a place, stay a while. Breathe it in, learn the codes, live the life.
Diana