30th September 2011
This story is jumping all over the place, but I just have to tell you about the day we had yesterday. A typical Kimberley day. I love the Kimberley. It has a tinge of danger around every corner. You just can’t let your guard down or you might just stuff up big time. We are anchored in Red Cone Creek just nine miles from Raft Point. We came over here because we got this badly photocopied information from a web site saying it was one of the top spots in the Kimberley. We were a bit disappointed as we motored into this wide muddy creek with low lying mangroves on either side. I guess we had it built up in our mind as being more picturesque place we could put the anchor down for a while to have a bit of a rest. We had been pretty well going for it, moving and up anchor every day or two. We were dreaming of a place, preferably near water (fresh) to chill out, write, paint etc. We had high hopes for Red Cone Creek, with the promise of a water fall and swimming holes. We dropped anchor and within half an hour the tide started to race through at unbelievable speeds. It reached nearly two knots on the log, standing still. We were right in the middle of the spring tide with 12.8 metre highs and 0.2 metre lows. The guide said “ A pleasant anchorage..... The inlet is short and tidal streams are therefore moderate.” We couldn’t get to where they said the anchorage was because although we were in 14 metres, the tide was dropping more than 12, so we anchored where the charter boats go. Anyway the tide ripped past the boat at 2 knots, but it only seemed to last for about half an hour and then it settled down to something more reasonable. A big charter boat Discovery 1 anchored not far away. I tried to hitch a ride to the falls, which we realized were 3.5 miles away, but they were full up, but they radioed us up to say that the trip was well worth it and the falls were flowing.
The morning saw us doing the washing. As usual a huge pile had mounted up. It is so hot now that I can’t face wearing a shirt for more than two days, if that. It gets so sweaty. Using the manual washing machine, me winding and washing and Rob hanging out we got four loads done. The washing machine is great. It takes and out 2.5 kgs of wash and you only have to wind it for 2-3 minutes, rinse it for 30 seconds and Bob’s your uncle. It comes out clean as a whistle. Whites have never been whiter.... and coloureds......well you know how it goes. Washing done we waited to catch the incoming tide to take us up the creek to the falls. It should be simple really. Just follow the river up. Ha! We were both a bit worried about this little adventure. The tides were ferocious and then there were the crocs.  Rob thought he saw the charter tender go up a tributary to the right, so going against my better judgement we tootled up to the right. The tide was with us all right and we were being whisked along at a great rate of knots. The tributary got narrower and the mangroves pushed in closer. Really good croc territory. We saw a little croc that was so interested in looking at us that the tide pushed it sideways into some branches, but it was just a little reminder that we were in their territory. We had a hatchet that we had found at mums and also a lump of timber as croc waddies. Narrower and narrower with branches off to left and right. I said to Rob we could get lost in here. Finally there was a rocky landing on the right, but no water. We pushed on further but it got so narrow that there were branches hanging into the water barring the way. This was obviously a no go so we went back to the rock landing. Maybe we had to climb up to see the falls. Rob let me off to do some exploring. As I scrambled up the rocks, I thought of Rob sitting in the little dinghy with overhanging mangroves and crocs lurking and called back to suggest that he go ashore and sit further up the rocks. On climbing up, it obviously was a water fall at some stage, but not now. I tried to climb a ridge to get our bearings but all I could see was acres of mangroves with Red Cone Hill and Raft Point in the distance. We were in the wrong spot.
The little dinghy with its 3.5 HP motor did well against the current and back into the main river. We saw a huge croc disguised as a floating log just lying there looking at us. We were pretty spooked. Back in the main river we still had an hour of flooding tide to get us up to the falls, if we could find them. Round and round countless bends. It seemed endless. At last the river narrowed into a narrow gorge with high rock faces and then at last around the next bend there it was, the water fall cascading into a deep green pool. Next problem was where to leave the dinghy where we could retrieve it and not have it either high and dry stranded on the rocks or floating out of reach in the middle. Rob slung the loop of the painter loosely over a tree branch. That worried us and we had to check that it was still there frequently. We clambered up the rock face. We didn’t want to tarry too long in the croc’s reach. The charter skipper said “Be very careful near the lower pool.” Yep got it. 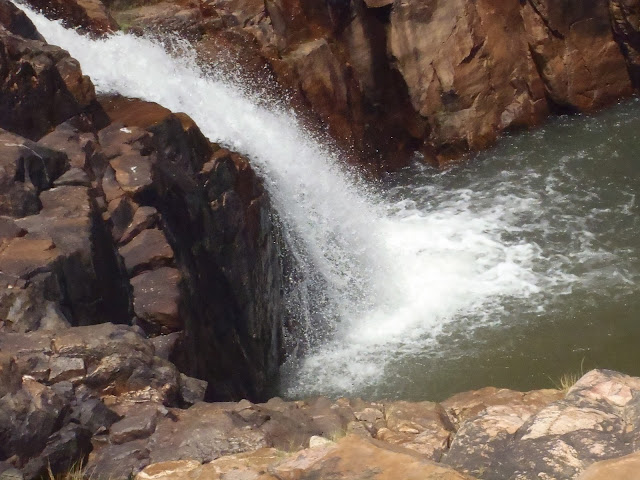 It was quite a climb but my little legs coped and Rob did well considering things are getting pretty hard for him now in the walking department. The next pool up looked a bit fierce but the next too were just right. The top pool was small but up to our chins if we crouched. It had a shady pandanas palm overhanging the cool pool and water lilies and green water weed decorating the water. What bliss. We sat in the pool and let the cool water caress us as it made its journey to the falls further down. 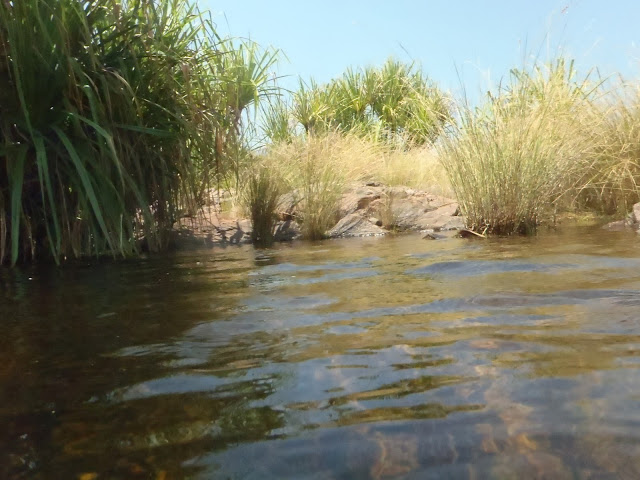 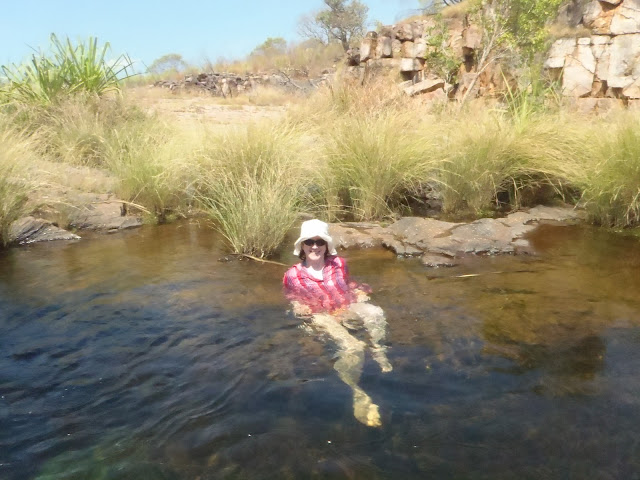 I spotted a black lizard about half a meter long, watching up from the water edge. As we sat with our feet in the water eating left over BBQed chicken and potato it swam across the pool towards us. It had a determination about as it headed straight for Rob. I thought Rob was going to sit on my lap in his attempt to back away from the lizard. We realized that lizzy was used to being fed and it waited patiently while we swam but now it wanted lunch too. We threw it some potato slices which it seemed to like, but had real trouble getting it down its throat. With no teeth it had to just gulp it down as best it could and we could watch the progress of the potato lump.
We weren’t really relaxed up there. Rather than a leisurely day by the water we only had a couple of hours as we got there so late. We watched carefully first the flooding of the lower pool and then the gradual reappearance of ringing the pool. Timing was everything. Leave it too late and we would be wading and pushing the dingy through the mud. No thank you. Our timing was pretty good really. We clambered back down the rocks and in to the dinghy, ready to catch the outgoing tide. We thought we were home and hosed and started to congratulate ourselves, but then I remember the fat lady and the singing thing. The tide sped us back down the river, we turned a corner and there was white water. The wind had come up while we were up stream and with the tide pushing one way and the wind the other there were waves in the river. The boat was a mere small dot in the distance. At least it was still there. That was one good thing I guess. Up and down over these metre and a half waves. Rob was in the front copping most of the spray, but even his big back didn’t shield me from the odd wave. The dinghy was filling up with water. It was only spray at this stage and I was hoping we didn’t cop a full on wave. At last The Doc was within striking distance. Rob said. She looks like she is moving, and that she did. The tide was ripping past her hull so fast that it looked like she was steaming ahead. It couldn’t be of course but the taut anchor chain said it all. We had to get back on to the boat with the tide streaming past at two knots and 1.5 metre waves coming up from behind. I manoeuvred the dinghy to the stern and Rob was able to make a lunge for the back of the boat. He held it fast while I took a huge leap at the boarding platform taking the dingy painter with me. It wasn’t graceful but it was good enough. I secured the davit lines while Rob valiantly held the dingy up against the stern of The Doc. With the boat secured we hauled the dinghy up and away from the marauding tide. We were soaking wet all that beautiful fresh spring water replaced by salt, and we collapsed in a heap exhausted. The Doc continued to buck and sway with the ongoing fight between tide and wind, but we were just happy to have a cuppa safely back on board. Just another day in the Kimberley.
Posted by Diana and Rob at Tuesday, November 15, 2011