7.30am saw us lift the anchor at Prudhoe Island and head east towards South Montague Sound. We were going through uncharted waters indicated by a big slab of grey on Cmap, so we picked our way carefully until we were on the area shown as the lovely blue of chartered waters on the map. Going past the islands we thought how like the Whitsundays it is, except there are no people, other boats and the navigation is a tad more than Grade 1 level. It is exciting sailing through the Kimberley with its tides, uncharted waters and the fact that you have to be totally self reliant. The isolation is complete.

We slid through a narrow canal and wound our way between islands to find our anchoring point off Wilyalkan Island. The island was rock strewn, but  looked older somehow than what we have been used to, more worn down and rounded. Poking up the top there are two or three what look like coconut palms pushing above the other growth in slender arching trunks. 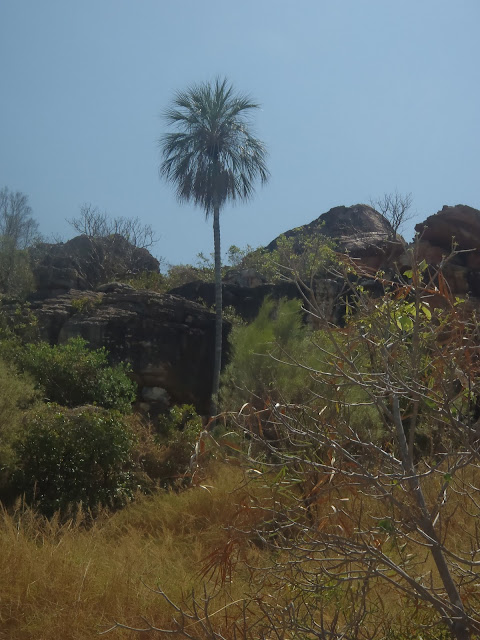 After lunch and a rest (we had sailed a gruelling 16NMs after all) we set off in the dinghy to go exploring. We motored past huge blocks of rock bigger than a house that looked like they had only just slid down the cliff face and boulders balancing  precariously ready to topple over with just a little push, it seems. We found some caves that I risked slippery rocks to climb to, but they were empty of any ancient art. Most interesting was finding a beach that would do very nicely for a BBQ later. 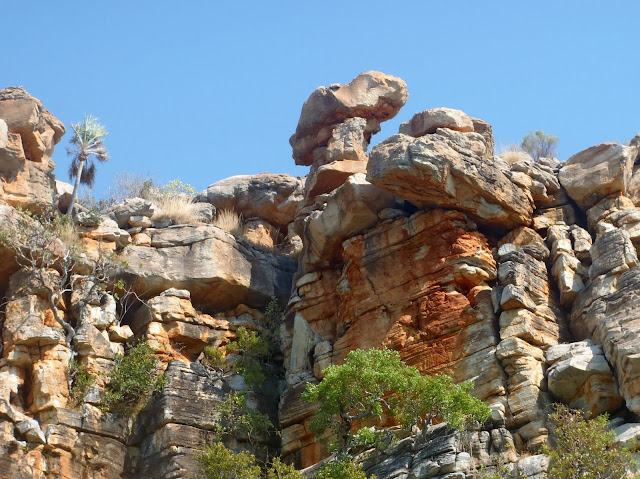 Our afternoon sched on HF with Frank and Karen was very scratchy but we did make out that their anchor winch had failed and they were thinking of going straight through to Darwin from Kartja Island, just out of the Hunter River. Their trip had been constantly dogged by gear failures and bad luck so it wasn’t really surprising. The news was a bit sobering and we did feel bad for them that they were going to miss out on some of the best bits of the Kimberley and that they were having such a bad time of it. With them in our thoughts we packed ready for our BBQ with folding chairs, hot plate meat and salads, and beer and wine of course. What followed was one of the special moments of the whole cruise. I want to write it down so the feeling and memory is never lost.  ( Frank & Karen were able to rig up a block and pulley system to raise their anchor so were able to continue their trip through the Kimberley in an abbreviated way)
The beach is shell grit and easy to land the dinghy and has large rounded rocks strewn about. Up higher past the wave like ridges of shell grit washed up by the tide there is an orange rock face and small cave and lying all about is dry wood seemingly ready chopped for the fire. We perched the chairs on top of the beach and sat there beer in hand like king and queen surveying the scene below. Stretched before us were islands bays and headlands softly changing in the sunset. Rob got to it and lit a fire behind a rock ledge and in no time we had delicious pork steaks and salads on our laps, all washed down with a glass of wine. 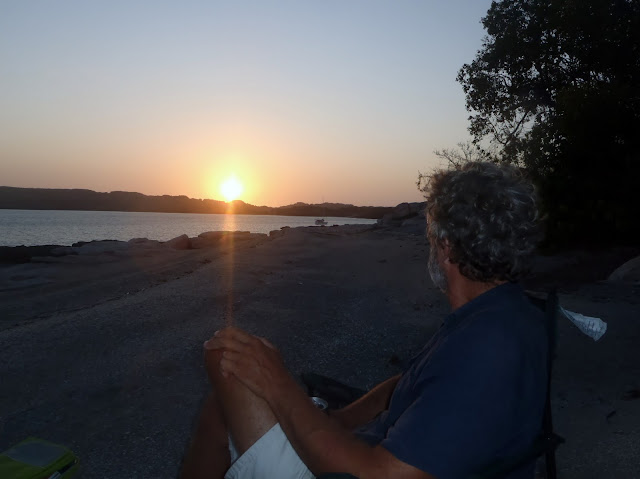 As we watched the big sun dip below the hills The Doctor was silhouetted in the bay. Two huge eagles floated catching thermals looking for the last feed of the day. (Stay low Motley). 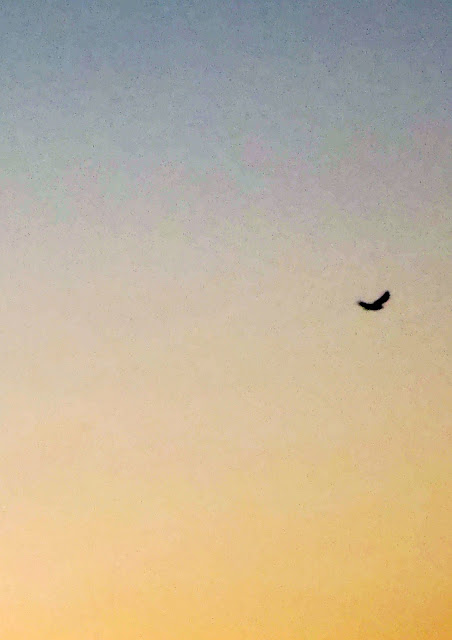 Too wonderful to leave just yet we put more wood on the fire, checked that the dingy was still where it should be and poured another wine. To complete the picture off in the distance a lone thunder head  which, as the light faded put on a grumbling, flashing show of lightening forks and pulsating inner lights. We talked about my Mum and how we both missed her in our own ways. She is always with us in our thoughts and is part of us and through her all that we do is possible.
In a conspiracy of beauty, as we motored back to The Doc in the dark, phosphorescence lit the dingy from below and left a shining path in our wake. 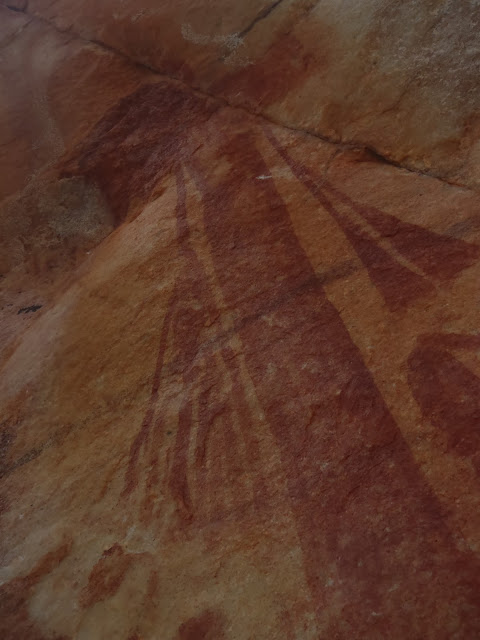 On further exploration we found an amazing art gallery on a rock face far up into the inlet. On the way up there the heat was getting quite extreme so we found a cool cave to wait for the tide to rise enough to get the dinghy over the rocks.
South Montague Sound was one of the highlights of the Kimberley for me. I stored lots of good memories here.
Diana
Posted by Diana and Rob at Sunday, November 27, 2011