Careful what you wish for - Osborne Islands


We left the sandy beach anchorage off SW Osborne and decided to do a bit more exploring of the island group. We had a mud map that indicated the site of "The biggest boab tree in the Kimberley". Rob was enthralled at the idea, but went along with going there anyway. We dropped anchor off Kidney Island and dinghied up between Kidney and Middle Osborne Islands. It was so hot, the sun piercing our skin even through our shirts. There was no sign of relief. We felt like we were being baked alive, but we found the boab off to the right, but nestled securely behind a protective forest of mangrove trees. We thought we found a path through the mangroves but it petered out to nothing. It was just a bit disconcerting wading through the mangroves and I wondered if "The biggest boab tree in the Kimberley" was really worth dicing death with a croc. We gave up and took the obligatory photo, that I am sure will look just like a bunch of bush and we I will wonder why I took it.
Next stop on our adventure was picking our way through the masses of pearl farms spread seemingly from one side of the passage between the islands to the other. We found a way through and dropped anchor of some rocks that reminded me a lot of a Japanese garden. They were arranged so perfectly and balanced so well with green foliage that they could easily be a temple garden.
We had only travelled 7NMs but the heat had taken it out of us and we fell asleep. As I woke from my snooze in the cockpit I noticed a black cloud out the back and said jokingly to Rob, looks like rain. Ha, ha. Suddenly the cloud was rumbling and flashing and the first big drops of rain dolloped on the cabin top and into the water. It got heavier and turned into a serious shower. We were like the proverbial drought stricken farmers dancing around in the rain, relishing the downpour as it washed down the last of the Dampier and Broome dust from the rigging. It got heavier and we could see bands of rain blocking out the mainland and coming out way.
A huge crack of lightening hit very close and immediately put an end to the party atmosphere. Now we were wide eyed and just more than a bit worried. The wind picked up and lashed our boat shade as the wind came from first one side then the other. The thunder was all around us and the rain was coming down in torrents. Really scared now, I turned off all the electrical equipment in the vain hope that if we got hit by lightening they would be spared. As quickly as it came the tropical storm spent itself out and we were left with damp everything, but the boat had been washed clean and the atmosphere felt cleansed and we felt revitalised. Welcome to the tropics, hot one minute and terrifying the next. 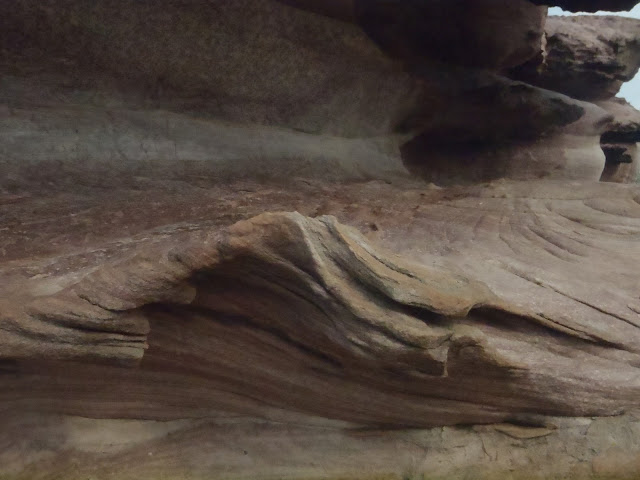 After all was clear we dinghied towards the “Japanese garden” and discovered rocky coves surrounded by sculptured rocks modelled by wind and water. Amazingly there were a stand of lush green mangroves growing out of pure white sand which added to the garden effect. We landed on a shell grit spit and topped up Motley’s litter tray. The work of the waves laid the shell grit in gently curving ridges lines. We carried on to find the three natural arches that stood like the empty windows of a ruined cathedral and clambered through a cave to discover a tiny white shell grit beach. Every day there is a new discovery and another exciting element to the amazing Kimberly.
Posted by Diana and Rob at Thursday, December 01, 2011