DOING THE MILES – Kalimantan to the Equator

DOING THE MILES – Kalimantan to the Equator


Kumai to Belitung was our longest leg yet. It was 222 nautical miles which we did in about 38 hours. Of all that time we only sailed for about 8 hours, so that motor just drummed on and on. For some reason making passages with the motor on seems more tiring, and this one was no exception with sloppy seas and also the constant worry of  unexplainable lights in the moonless night.


An added bit of excitement was when at about midnight I was resting in the saloon, off watch and I heard a thump on the deck and a rattle, rattle, roll. “That can’t be good” she thinks. I raced up on deck to see what it was, to see the 'goose neck' swinging free from the mast. (The 'goose neck' is the part where the horizontal boom meets the mast.) With the boat on automatic steering, we both went up to see what could be done. The nut holding a big pin in place had worked loose and luckily hadn’t gone overboard, but had rolled to a safe place on the deck. With seas that rolled the boat from side to side it was impossible, as hard as we tried, to get it all connected up again. As soon as we got the heavy boom lined up, the boat would lurch sideways and the boom would swing away. We had to secure it somehow, so Rob thought of using one of the spare halyards (ropes) on the mast to hold the big boom at least at the right height. It still wouldn’t line up properly despite much grunting and groaning. We were getting very tired. All the while I would run back to the cockpit to check the radar and chart plotter to make sure we weren’t going to run into anything we shouldn’t. We tried everything to line things up, until I thought of using the boom vang (strut between boom and mast base) to slide the boom towards the mast and it worked! An hour later we collapsed back into the cockpit exhausted. Team Doctor had come through again!


We slid quietly into the anchorage at the island of Belitung at about 7 o’clock that night, very tired little bunnies hoping for a good rest, but Belitung greeted us with one of the worst anchorages we had been in. It was completely open to the weather and a beam swell. We tried unsuccessfully to cross the bar into the shelter of the river, but we went aground and had to struggle to get to deeper water. Consequently we had to ride out quite a tropical storm that gave us 38 knot winds and a boat that pitched manically from side to side. Life on board was pretty desperate as we hung on for dear life. Unfortunately we were stuck there as we had paper work to be processed, our fuel jerries to collect and a bag of washing being done. Otherwise we would have high tailed it out of there quick smart. 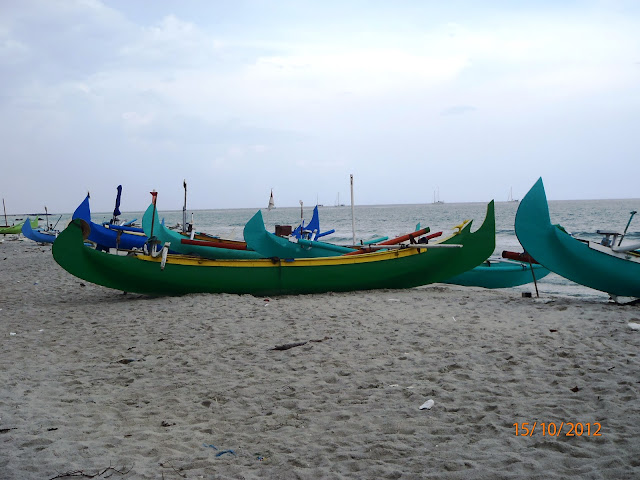 As all storms do, it passed and we finished up having a very pleasant three day stay in Belitung. The locals really turned it on for us yachties and were intent on feeding us morning, noon and night for free. They took us to coffee shops (Belitung is famous for its coffee shops), the markets and to the Regent’s house for meals. At the festivities for the anniversary of the regency we were seated on the podium with the important guests to watch the famous Lion Dance. We were even given 100 litres of free diesel, unfortunately of dubious quality! The people were so warm and welcoming and couldn’t do enough for us. It certainly was the most hospitable place in Indonesia.

The next few days were a blur of sailing miles. The deadline for the expiration of our visa was looming and we wanted to clear out of Indonesia as far north as we could. We motored most of our way across the South China Sea to the island of Bangka (170NMs), then to the beautiful island of Lingga (94NMs). All these places deserve more than an overnight stay, but we are so constrained by the crazy visa regulations here. We had a full day at Lingga where steep sided mountains dripped their jungle foliage towards the water. There was a gentle drizzle of rain that softened the edges of everything to a Turner like landscape.


With our people batteries charged we headed north towards the equator. Just before the island of Kentar we crossed from the southern to the northern hemisphere. Rob was keen to test the theory about the water going down the plug hole in the opposite way, but the rolling of the boat made the experiment difficult, so it was abandoned. We were well prepared though, as crossing the equator in your own boat is a very auspicious occasion not only because we have sailed all this way, but also because our friend, benefactor and foe, Neptune must be acknowledged. He must have been happy with us as no soon had I said that wouldn’t it be nice if we sailed, not motored across the line, but up piped a lovely 18 knot breeze which soon died off as soon as we were over all the zeros. Many people dress us for the occasion but this was our crossing the equator ceremony. Firstly there was the obligatory photo of the GPS as you cross from South to North, 00.00.00. Then off to the stern of the boat for a good dousing with salt water, which wasn’t too bad a thing to do, considering the heat of the day. Finally we lined up three drinks of gin and tonic with lime, one for Rob, one for me and one for our good King Neptune, which I hope he enjoyed. Just to make sure he was happy, we each said a few word of thanks for keeping us safe this far.  So there we were 11.22am 22nd October, 2012, a bit salty, a bit tipsy and more than a bit pleased with ourselves!