After our little adventure at the Gili Islands we were happy to have a few days in the lovely secure bay just to the west of Medana Bay, where the majority of boats were. The bay had whitish sand and was fringed by coconut palms, the perfect pace for a luxury resort. As luck would have it we heard that you could have a meal at the resort and that entitled you to use of the pool. Always out for new experiences (and a swim in the pool) we set off with five others and dinghied to the most amazing resort I have ever seen. We threw in our bag of washing, on the off chance that they could do our laundry. We were greeted by a very polite security guard who directed us to the restaurant. The setting was magnificent. The open air restaurant overlooked a beautiful big pool surrounded by day beds, lush gardens and typical Lombok fixtures. 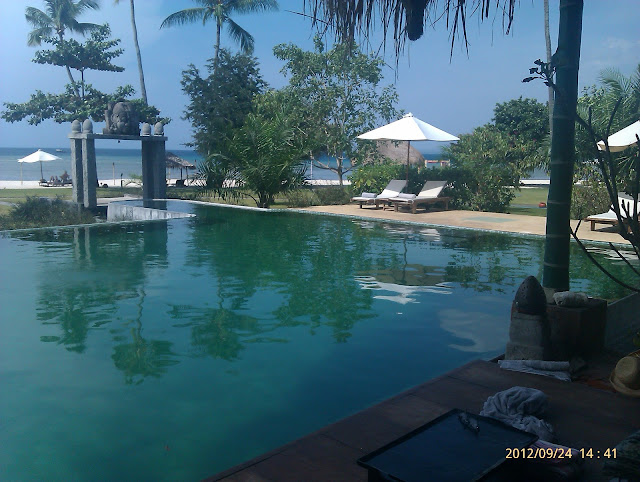 We claimed a day bed and started ordering fruit cocktails that we could leave on the water’s edge to sip as required, as we floated languidly in the pool. Lunch was expensive. Together with cocktails and two courses it cost about $30AUD each. That is the most we have paid for a meal since we left Darwin. The laundry was taken care of but I learned my lesson. You don’t take your laundry to a five star resort. The charge was $53!!! Despite the shock of the laundry debacle we whiled away the afternoon lounging around the pool, eating and drinking with our friends.  The conversation flowed and refreshingly it was not all about boats. By the way, the washing was magnificent, very clean, ironed to a crispness never seen before, and neatly packaged in brown paper with string. Motley loves the string so that must be worth $53!


The anchorage was safe enough to leave the boat so we booked a hotel room high in the mountains of Lombok. A taxi took us the 40kms to Mount Rinjani and only cost $15. Our hotel room, perched on a steep cliff, had glass floor to ceiling windows overlooking vivid green rice fields and the spectacular summit of the volcano, Mount Rinjani.  We went with the deluxe room and it was a bit on the expensive side at $60AUD, but it was worth it for the view. In typical Indonesian fashion, although the room had a TV and air conditioner, which we were looking forward to with some anticipation, the power went out and stayed out pretty much until we went to bed. The staff arrived with candles, which was all very romantic, but..... The room was huge and the bed a big and comfortable  four poster with mosquito nets.


A trip to Rinjani is not complete without a visit to the two waterfalls that the area is famous for. We engaged a guide at the entrance to the park and he led us to the first fall. It hurled itself down in a single column of water with such strength that you would be unable to stand directly under its torrent. After seeing Rob’s difficulty with walking, the guide strongly suggested that he remain at the first waterfall while he and I went further up to the second. In retrospect it was a good call as we had to scramble over rocks, pass over a narrow overhead culvert and wade through fast flowing streams. The walk wound its way through lush tropical rain forest following a crystal clear mountain stream. It is just the sort of therapy that a sailor accustomed to squinting into the glare of ocean needs. It felt like a cool cloth placed over a fevered brow. 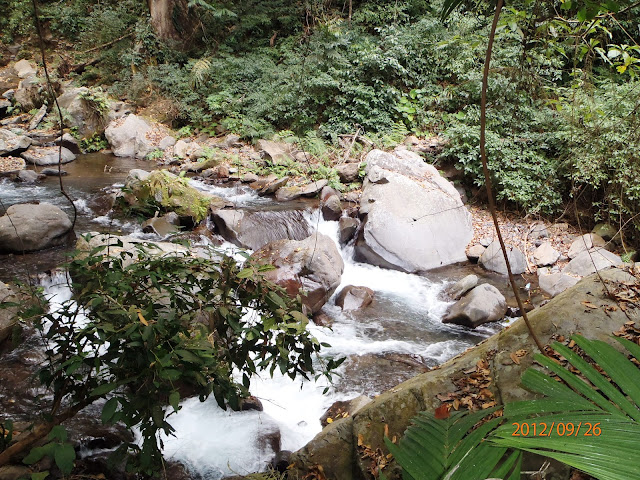 The guide was a man probably in his sixties and he had very limited English. It was a good opportunity to try out my Indonesian, but I hit the wall when it got past  “Do you have a wife? Children? Grandchildren?” I learned that he had two wives and they both wear the hi jab. Now this made me feel a little nervous as I intended to bath in the waters under waterfall. Rationalizing that he probably gets to see lots of tourists and many less modest than myself I went ahead with my plan. We arrived at a beautiful waterfall that plummeted into a small swimming hole. I gave him my camera and glasses for safe keeping and disrobed discreetly behind a boulder. Luckily I had my bathers underneath. The water thundered down so fiercely that it created its own wind which lashed your face with spray. It was quite nerve racking inching my way towards the pool, but I slipped into the water and once there, it was exhilarating. Unbeknown to me my guide had been snapping away with my camera and documented my every move, including the disrobing. 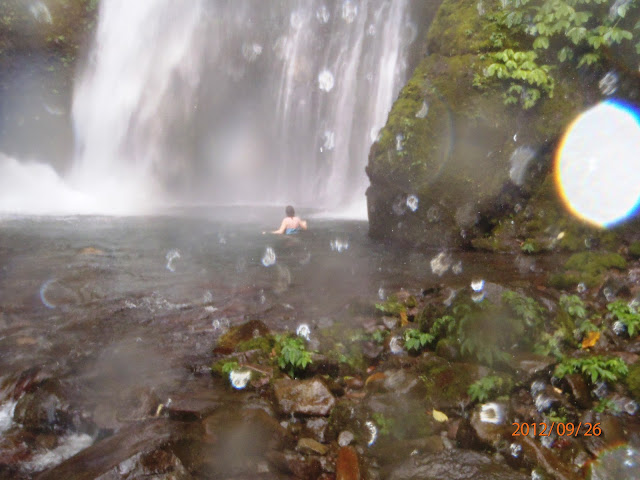 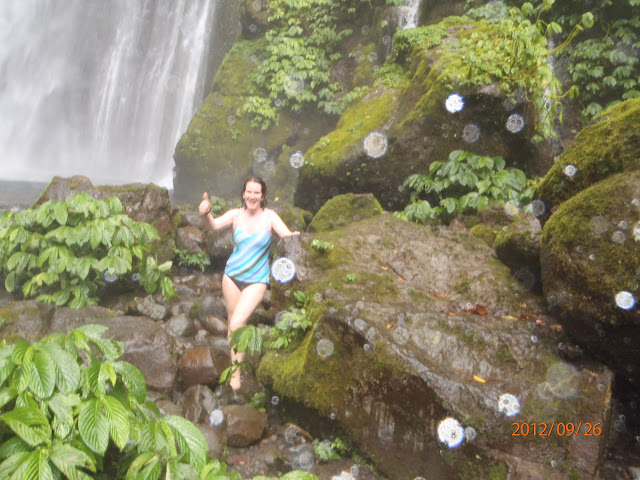 We went back to find Rob and he had had a nice time relaxing by the waterfall steeling himself for the long ascent to our hotel. We returned to the boat after having a refreshing change from sailing, navigating and the busy routine of running a boat.  We had left the care of Motley with a Fran, a cruising friend and cat lover who had to leave her cats behind. Motley I fear was a great disappointment, and wouldn’t leave her safe place to play with her. On our arrival home we were greeted with a meow that said simultaneously, I am glad you’re home, but DON’T EVER DO THAT AGAIN.! Sorry Mot, but you’re going to have to get used to it.